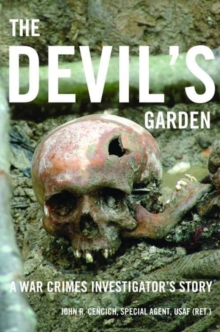 In 2002 John Cencich travelled to a safe house in Belgrade to interview the former head of a Serbian secret intelligence agency.

In less than an hour, Cencich had what he needed: corroboration of information provided by another spy.

This evidence would be used against Slobodan Milosevic in his war crimes trial at The Hague.

For the veteran United Nations war crimes investigator, however, the trip was business as usual. The Devil's Garden is the inside story of the investigation and indictment of Slobodan Milosevic and the identification of fifteen coperpetrators in the joint criminal enterprise (JCE) that had resulted in the massacre of thousands of non-Serbs.

As the senior American investigator at The Hague, Cencich drew up the investigative plan, codeveloped the prosecution theory of the JCE, and wrote the first significant draft of the indictment.

He also led the international team of police investigators, detectives, and special agents on the case against Milosevic and his inner circle of secret police, assassins, spies, terrorists, underworld figures, and murderous paramilitary leaders for crimes committed throughout Croatia. Here, readers will travel alongside Cencich as he journeys to The Hague and will see how these once-in-a-lifetime experiences affect him to this day.

Detailing one of the largest international criminal investigations ever undertaken, this book is a unique blend of history, international law, and true crime in Europe's deadliest battles since World War II. About the AuthorDr. John Cencich is a legal scientist and career law-enforcement professional who led the investigation of Slobodan Milosevic for crimes alleged to have been committed in Croatia, He was a senior United Nations war crimes investigator headquartered at The Hague, Netherlands, where he led a team of police investigators on one of the largest international criminal investigations undertaken in history.

These cases involved crimes against humanity including murders; extermination; assassinations; sexual assaults; forced labour; and torture. He is a professor of justice studies at California University of Pennsylvania and director of the Pennsylvania Institute of Criminological and Forensic Sciences.

A decorated police veteran and former special agent with the U.S.

He lives in Pittsburgh, Pennsylvania.