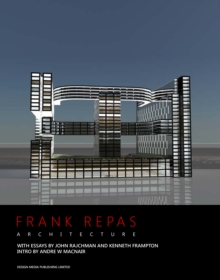 Frank Repas established his independent architectural practice in New York City in 1985, and shortly thereafter became one of three finalists in the open competition for the large scale architectural master plan for the Arverne Waterfront District in New York. His project was exhibited at the Municipal Arts Society in 1987. Subsequently he was a design consultant for several large projects in the city. Francis Repas Architecture PLLC was established in 2000 upon his selection as designer of an innovative seven building waterfront development in the centre of Shanghai, China, including the operating headquarters of the 2010 World's Fair in Shanghai (Expo 2010). Among the projects presented here are SCG Headquarters Building, Shanghai Port International Cruise Terminal, Industrial and Commercial Bank of China (ICBC), Middle East Mixed Use Complex, Vienna Hotel Study and Shanghai Premier Theatre.