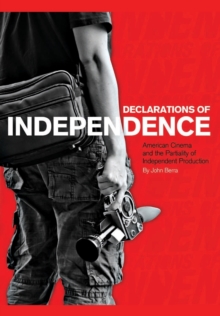 Declarations of Independence : American Cinema and the Partiality of Independent Production Paperback / softback

But how independent are these movies? As John Berra contends in "Declarations of Independence," the supposedly alternative film scene employs the same production techniques as its Hollywood counterparts and may find an uncritical audience in fans looking to attach personal sentiments and social reference points to art forms.

This provocative volume questions the autonomy of independent film, asking if it is possible for a unique filmic vision to thrive in an industry of mass production."