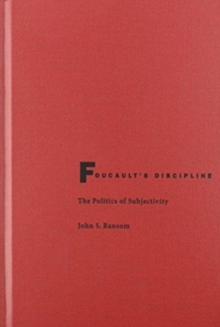 In Foucault's Discipline, John S. Ransom extracts a distinctive vision of the political world-and oppositional possibilities within it-from the welter of disparate topics and projects Michel Foucault pursued over his lifetime.

Uniquely, Ransom presents Foucault as a political theorist in the tradition of Weber and Nietzsche, and specifically examines Foucault's work in relation to the political tradition of liberalism and the Frankfurt School.

By concentrating primarily on Discipline and Punish and the later Foucauldian texts, Ransom provides a fresh interpretation of this controversial philosopher's perspectives on concepts such as freedom, right, truth, and power.

Foucault's Discipline demonstrates how Foucault's valorization of descriptive critique over prescriptive plans of action can be applied to the decisively altered political landscape of the end of this millennium.

By reconstructing the philosopher's arguments concerning the significance of disciplinary institutions, biopower, subjectivity, and forms of resistance in modern society, Ransom shows how Foucault has provided a different way of looking at and responding to contemporary models of government-in short, a new depiction of the political world. 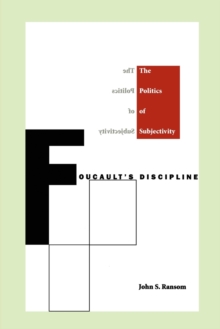