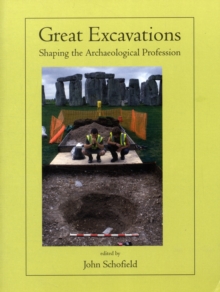 Great excavations inspire and capture the imagination of both the public and archaeologists alike; sites like Danebury, Sutton Hoo, Maiden Castle, Mucking and York conjure images of great discoveries and leaps in knowledge.

But what was it like to participate in these excavations?

What is the story of these projects, and what made them great?

This is a fascinating and entertaining retrospective documenting some of the seminal British excavations, assessing why they were so significant and why they persist in the memory and folklore of archaeologists today.

It is also a social history of the profession and one that should stir memories and dispel (or corroborate) some urban myths that younger archaeologists may be aware of.

An impressive list of authors and projects make this a significant contribution to the history and development of British archaeology over the course of the twentieth century.

The world of archaeology has changed dramatically over the past twenty-five years, not least in becoming a profession.

One of the clear messages of this book is the requirement for archaeology that great excavations continue in the future, to inspire another generation of archaeologists.

The scope of archaeology may have changed, and the methodologies with it.

The politics of excavation have changed too, with a more commercially driven and professional endeavour.

But it is still, typically, the direct physical engagement with earth, artefacts, place and people (of the past and the present) that draws us in.

This is why excavations matter, and why they can be great.