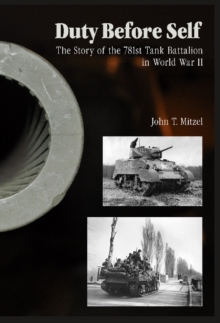 Duty Before Self: Story of the 781st Tank Battalion in World War II Hardback

In January 1943, and as World War II entered its second year it was evident that U.S. tanks were outgunned, under-armored, and underpowered.

In short, they weren't cutting the mustard, but there was no time for a long development project.

When the results of the "Million Dollar Tank Test" were collected, what resulted was the Sherman "Easy Eight," an easier to manufacture tank that was also such an effective fighting vehicle that it would serve for another thirty years.

The 781st Tank Battalion shipped out to Europe, where, equipped with the "Easy Eight," it thwarted Hitler's last major offensive in the West a Operation Nordwind a and swept southern Germany as the tip of the U.S.