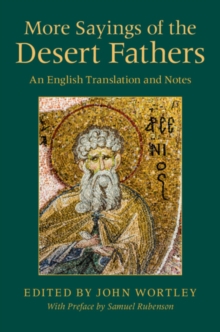 More Sayings of the Desert Fathers : An English Translation and Notes Hardback

Most of the Tales and Sayings of the Desert Fathers (Apophthegms) have survived in Greek and most of them are now available in English, almost 2500 in number.

A further six hundred items in six languages have been available in French for some time, but often in second- and even third-hand translations.

These have now been newly translated directly from the original languages by scholars skilled in those languages and are presented, alongside an Introduction and brief notes, to the English reader who wishes to know more of those men and some women who rejected 'the world' and went to live in the desert regions of Egypt and elsewhere in the fourth to seventh centuries.