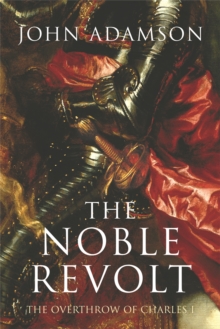 The Noble Revolt : The Overthrow of Charles I Paperback / softback

A magnificent new study of the political crisis that produced the overthrow of King Charles I, and came to engulf all three Stuart kingdoms - England, Scotland, and Ireland - in war during the 1640s. John Adamson's book traces the careers and fortunes of the small group of English noblemen who risked their lives and fortunes to challenge the king's attempt to create an authoritarian monarchy in the Stuart kingdoms during the 1630s. What was achieved in 1641 astonished - and alarmed - contemporaries: the trial and execution of the king's most powerful minister; a new, and sometimes violent, phase of religious reformation; the drastic curbing of the powers of the Crown; the planning of a major Anglo-Scottish military intervention in the Thirty Years' War. The threat of war was rarely absent and the resort to armed force come to seem a viable, perhaps even the only, means of resolving the conflicts within the Stuart realms.