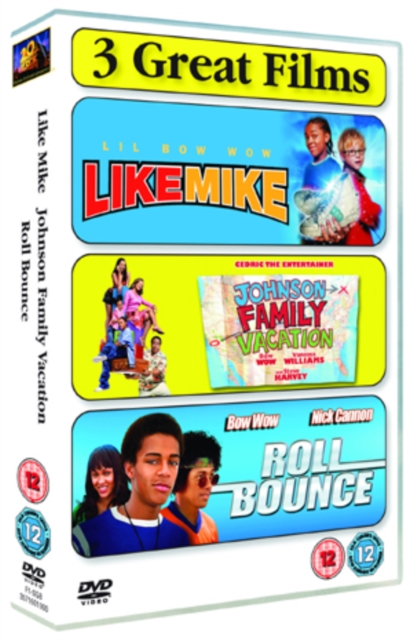 Triple bill featuring three comedy movies. 'Johnson Family Vacation' (2004) stars comedian Cedric the Entertainer as Nate Johnson, a Los Angeles man estranged from his wife and three children - who decides to reconnect with his family by taking them with him on a road trip to Missouri for a big family reunion.

En route, everything that could possibly go wrong does go wrong: his wife (Vanessa L.

Williams) is suspicious of him, the children won't stop squabbling, the onboard navigation system on their expensive new mobile home goes into meltdown - not to mention a run-in with the law and an unfortunate encounter with a cement mixer.

In 'Like Mike' (2002), Calvin (Lil Bow Wow) lives in an orphanage and desperately dreams of being adopted by a real family.

When he discovers a pair of magical trainers another of his dreams comes true; the trainers lead to him being discovered by the trainer of an all-star team, which he begins to play for.

But the headmaster of the orphange, Bittleman, is trying to stop Calvin from playing.

Can he and his friends defeat Bittleman? 'Roll Bounce' (2005) is set in the late 70s, when roller skating to soul tunes and disco was a way of life for teen skater Xavier (Bow Wow) and his pals.

But when their local rink closes, X and his crew must pull together as a team to try and win big money at a rival rink's Roller Jam skate off.