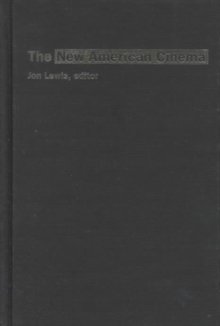 This collection of essays provides the first comprehensive survey of Hollywood and independent films from the mid-sixties to the present.

Deliberately eclectic and panoramic, The New American Cinema brings together thirteen leading film scholars who present a range of theoretical, critical, and historical perspectives on this rich and pivotal era in American cinema. The essays are divided into three sections: "Movies and Money," "Cinema and Culture," and "Independents and Independence." The first section focuses on the economics of the industry and analyzes the connection between the film business and the finished product.

Topics include a look at the economic conditions that made the seventies' auteur renaissance possible, the distribution of studio and independent films, and the recent spate of mergers and acquisitions that have come to characterize the new Hollywood.

The final section casts a keen eye on films produced and exhibited outside the commercial mainstream, examining the financial realities of "indie" films; the influence of independent filmmaker John Cassavetes on Coppola, Altman, and Scorsese; the stereotyping of African Americans in mainstream cinema; and the films of independent women filmmakers.