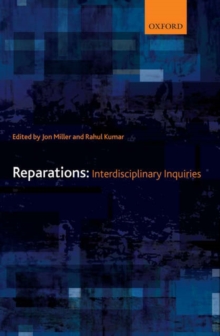 Reparations is an idea whose time has come. From civilian victims of war in Iraq and South America to descendents of slaves in the US to citizens of colonized nations in Africa and south Asia to indigenous peoples around the world - these groups and their advocates are increasingly arguing for the importance of addressing historical injustices that have long been either ignored or denied. This volume aims to contribute to these debates by focusing the attention ofa group of highly distinguished international experts on the ways that reparations claims figure in contemporary political and social justice movements. Four broad types of reparations claims are examined, those involving indigenous peoples, the legacy of slavery in the United States, victims of warand conflict, and colonialism. In each instance, scholars and activists argue about the character of the injustice for which reparations are owed, why it is important to take these demands seriously, and what form redress should take. The aim is not consensus but to exhibit better the complexity of the issues involved - a goal which the interdisciplinary nature of the volume furthers - as well as the importance of taking seriously both conceptual issues and the actual politics ofreparations.