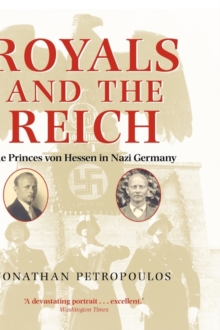 Royals and the Reich : The Princes von Hessen in Nazi Germany Hardback

The link between Hitler's Third Reich and European royalty has gone largely unexplored due to the secrecy surrounding royal families.

Now, in Royals and the Reich, Jonathan Petropoulos uses unprecedented access to royal archives to tell the fascinating story of Queen Victoria's great-grandsons, the Princes of Hesse, and the important role they played in the Nazi regime.

Petropolous tells the fascinating tale of how, lured by prominent positions in the Nazi regime and highly susceptible to nationalist appeals, the princes became enthusiastic supporters of Hitler and helped make the Nazis socially acceptable to wealthy, high-society patrons. Permitted access to Hessen family private papers and the Royal Archives at Windsor Castle, Petropoulos follows the story of the House of Hesse through to its tragic denouement - the princes' betrayal and persecution by an increasingly paranoid Hitler, followed by prosecution after the war.