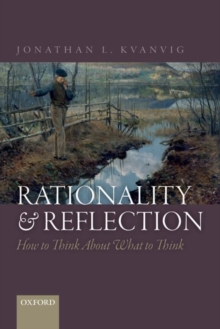 Rationality and Reflection : How to Think About What to Think Paperback / softback

Jonathan L. Kvanvig presents a conception of rationality which answers to the need arising out of the egocentric predicament concerning what to do and what to believe.

He does so in a way that avoids, on the one hand, reducing rationality to the level of beasts, and on the other hand, elevating it so that only the most reflective among us are capable of rational beliefs.

Rationality and Reflection sets out a theory of rationality-a theory about how todetermine what to think-which defends a significant degree of optionality in the story of what is reasonable for people to think, and thereby provides a framework for explaining what kinds of rational disagreement are possible.

The theory is labelled Perspectivalism and it offers a unique account of rationality,one that cuts across the usual distinctions between Foundationalism and Coherentism and between Internalism and Externalism.

It also differs significantly from Evidentialism, maintaining that, to the extent that rationality is connected to the notion of evidence, it is a function both of the evidence one has and what one makes of it.