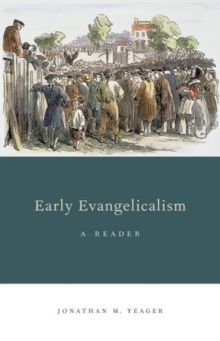 Evangelicalism has played a prominent role in western religion since the dawn of modernity.

Coinciding with the emergence of the Enlightenment in America and Europe, evangelicalism flourished during the transatlantic revivals of the eighteenth century.

In addition to adopting Protestantism's core beliefs of justification by faith, scripture alone, and the priesthood of believers, early evangelicals emphasized conversion and cross-cultural missions to a greater extentthan Christians of previous generations.

Most people today associate early evangelicalism with only a few of its leaders.

Yet this was a religious movement that involved more people than simply Jonathan Edwards, John Wesley, and George Whitefield.

Early evangelicals were Anglicans, Baptists, Congregationalists, Methodists, Moravians, and Presbyterians and could be found in America, Canada, Great Britain, and Western Europe.

They recorded their conversion experiences and kept diaries and journals that chronicled their spiritual development.

Early Evangelicalism: A Reader is an anthology that introduces a host of important religious figures.

After brief biographical sketches of each author, this book offers oversixty excerpts from a wide range of well-known and lesser-known Protestant Christians, representing a variety of denominations, geographical locations, and underrepresented groups in order to produce the most comprehensive sourcebook of its kind.