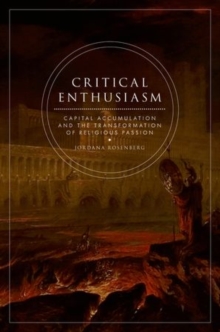 The Atlantic world of the long eighteenth century was characterized by two major, interrelated phenomena: the onset of capital accumulation and the infusion of traditions of radical religious rapture into Enlightenment discourses.

In exploring these cross-pollinations, Critical Enthusiasm shows that debates around religious radicalism are bound to the advent of capitalism at its very root: as legal precedent, as financial rhetoric, and as aesthetic form.

Tounderstand the period thus requires that we not only contextualize histories of religion in terms of the economic landscape of early modernity, but also recast the question of secularization in terms of the contradictions of capitalism. Critical Enthusiasm contributes to new directions of scholarship in literary and legal history, secularization studies, and economic criticism.

It is unique in producing a model for literary and cultural study that is simultaneously attuned to economic and religious forces.

By approaching the history of capitalism through religious debates, Critical Enthusiasm discloses significant intersections of aesthetic form and of financial flows that have been hitherto ignored.

These transformations-colonial plunder, therise of finance, the administration of racialized labor, and the legal reform that justified such practices-shaped the period; they also laid the foundation for our contemporary world.