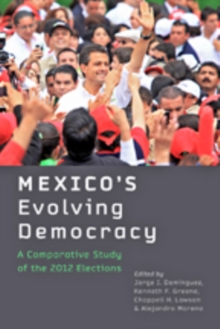 Mexico's Evolving Democracy : A Comparative Study of the 2012 Elections Hardback

In 2012, the Institutional Revolutionary Party (PRI)-which had governed Mexico with an iron grip for 71 years before being ousted in 2000-was surprisingly returned to power.

In Mexico's Evolving Democracy, a team of distinguished political scientists delivers an exceptional analysis of the remarkable 2012 Mexican elections.

Extending the scholarship that the editors generated in their panel studies of the 2000 and 2006 elections, the book assesses all three elections from both traditional and nontraditional vantage points, seeking fuller answers to the lingering question of why this maturing democracy returned the party associated with Mexico's old regime to office.

They also delve into issues of clientelism, corruption, drugs, violence, and the rise of new protest movements in the run-up to and aftermath of the elections.

Not only does the book provide rich detail for Latin American electoral and democratization scholars, but its coherent narrative will also appeal to those unfamiliar with Mexican politics.

Parts one and two offer an excellent recap of the "state of play" in 2012; part three analyzes why Mexicans voted as they did; and part four considers the election's implications for Mexico's political system more broadly.