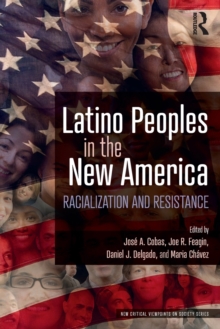 "Latinos" are the largest group among Americans of color.

At 59 million, they constitute nearly a fifth of the US population.

Their number has alarmed many in government, other mainstream institutions, and the nativist right who fear the white-majority US they have known is disappearing.

During the 2016 US election and after, Donald Trump has played on these fears, embracing xenophobic messages vilifying many Latin American immigrants as rapists, drug smugglers, or "gang bangers." Many share such nativist desires to build enhanced border walls and create immigration restrictions to keep Latinos of various backgrounds out.

Many whites' racist framing has also cast native-born Latinos, their language, and culture in an unfavorable light. Trump and his followers' attacks provide a peek at the complex phenomenon of the racialization of US Latinos.

This volume explores an array of racialization's manifestations, including white mob violence, profiling by law enforcement, political disenfranchisement, whitewashed reinterpretations of Latino history and culture, and depictions of "good Latinos" as racially subservient.

But subservience has never marked the Latino community, and this book includes pointed discussions of Latino resistance to racism.

Additionally, the book's scope goes beyond the United States, revealing how Latinos are racialized in yet other societies.