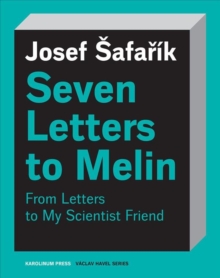 Part of the Vaclav Havel series

Josef Safarik's Seven Letters to Melin is an exploration of man's alienation from nature--and from himself--in the modern technological age.

Conceived as a series of letters to Melin, an engineer who believes in the value of science and technical progress, the book grows skeptical of such endeavors, while also examining mankind's search for meaning in life.

To help uncover this meaning, Safarik posits a dichotomy between spectator and participant.

The role of participant is played by Robert, an artist who has committed suicide.

The spectator, embodied by the scientist Melin, views the world from a distance and searches for explanations, while the artist-participant creates the world through his own active engagement. Through these exchanges, Safarik argues for the primacy of artistic creativity over scientific explanation, of truth over accuracy, of internal moral agency over an externally imposed social morality, and of personal religious belief over organized church-going.

Safarik is neither anti-scientific nor anti-rational; however, he argues that science has limited power, and he rejects the idea of science that denies meaning and value to what cannot be measured or calculated. Safarik's critiques of technology, the wage economy, and increased professionalization make him an important precursor to the philosophy of deep ecology.

This book was also a major influence on the Czech president Vaclav Havel; in this new translation it will find a fresh cohort of readers interested in what makes us human.