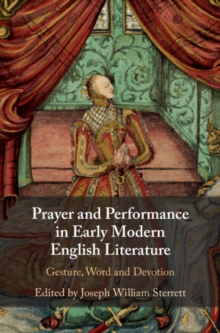 Central to these debates were questions of prayer, questions powerful enough to splinter the English church and to fuel a ferocious civil war.

This collection of thirteen newly commissioned essays traces the controversy and value given to the performance of prayer, through the body, the spoken word and written text, as well as its representation on stage.

Through close readings of the works of Christopher Marlowe, William Shakespeare, John Donne, John Milton and Henry Vaughan amongst others, this book examines the performative aspects of prayer in a range of literary modes.

This broad range of study is expanded further with chapters focussing on the private religious diaries of men and women throughout the seventeenth century, and the convergence of music and prayer in the work of William Byrd.