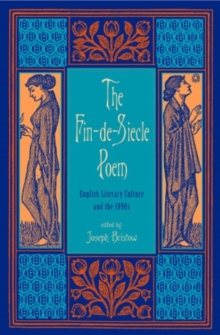 The Fin-de-Siecle Poem : English Literary Culture and the 1890s Hardback

Featuring innovative research by emergent and established scholars, The Fin-de-Siecle Poem throws new light on the remarkable diversity of poetry produced at the close of the nineteenth century in England.

Opening with a detailed preface that shows why literary historians have frequently underrated fin-de-siecle poetry, the collection explains how a strikingly rich body of lyrical and narrative poems anticipated many of the developments traditionally attributed to Modernism.

Each chapter in turn provides insights into the ways in which late-nineteenth-century poets represented their experiences of the city, their attitudes toward sexuality, their responses to empire, and their interest in religious belief. The eleven essays presented by editor Joseph Bristow pay renewed attention to the achievements of such legendary writers as Oscar Wilde, John Davidson, Ernest Dowson, Lionel Johnson, and W.B.

Yeats, whose careers have always been associated with the 1890s.

Mary F. Robinson, and Graham R. Tomson. The Fin-de-Siecle Poem brings together innovative research on poetry that has been typecast as the attenuated Victorianism that was rejected by Modernism.

The contributors underscore the remarkable innovations made in English poetry of the 1880s and 1890s and show how woman poets stood shoulder-to-shoulder with their better-known male contemporaries.Joseph Bristow is professor of English at the University of California, Los Angeles, where he edits the journal Nineteenth-Century Literature.

His recent books include The Cambridge Companion to Victorian Poetry, Oscar Wilde: Contextual Conditions, and the variorum edition of Oscar Wilde's The Picture of Dorian Gray.