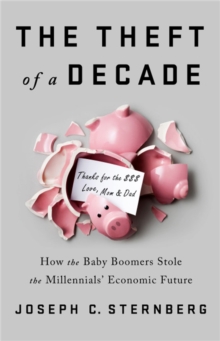 The Theft of a Decade : How the Baby Boomers Stole the Millennials' Economic Future Hardback

The Theft of a Decade is a contrarian, revelatory analysis of how one generation pulled the rug out from under another, and the myriad consequences that has set in store for all of us.

The millennial generation was the unfortunate victim of several generations of economic theories that made life harder for them than it was for their grandparents.

Then came the crash of 2008, and the Boomer generation's reaction to it was brutal: politicians and policy makers made deliberate decisions that favored the interests of the Boomer generation over their heirs, the most egregious being over the use of monetary policy, fiscal policy and regulation.

For the first time in recent history, policy makers gave up on investing for the future and instead mortgaged that future to pay for the ugly economic sins of the present.

This book describes a new economic crisis, a sinister tectonic shift that is stealing a generation's future.