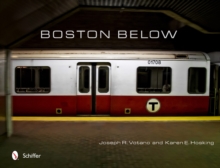 Every day, roughly 720,000 people from all walks of life use the four lines of the Boston MBTA subway system: Red, Green, Blue, and Orange.

The T, as it's known, is a vital link to living, working, or visiting in Boston.

The subway system acts as the city's arteries. It includes 28 underground and 80 above-ground stations.

Over 145 compelling art photographs explore the T-riders, their behavior, their actions when waiting for or riding a train, and their response to the chaotic push of rush hour.

With a keen eye, both the T's infrastructure and its many stations with their varied architecture, artwork, and physical layouts are captured.

With the first tunnel excavation begun in 1895 and the last station completed in 1985, there is plenty of variation to explore.

Interestingly, this volume also offers a rarely seen glimpse of how the trains are kept operational in several maintenance facilities.

Here is a fascinating visual journey through one of the nation's oldest subway systems.

Whether you are a regular subway rider, a fan of photography, a train enthusiast, or a people watcher, there is something here for you.