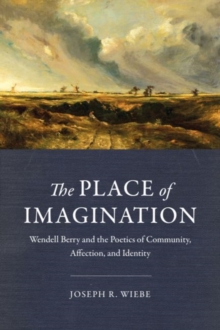 The Place of Imagination : Wendell Berry and the Poetics of Community, Affection, and Identity Hardback

WendellBerry teaches us to loveour placesato pay careful attention to where we are, to look beyond and within,andto live in ways that are not captive to the mastery of cultural, social, or economic assumptions about our life in these places.Creation has its own integrity and demands that we confront it. In The Place of Imagination , JosephR. Wiebe argues that this confrontation is precisely what shapes our moral capacity to respond to people and to places.

Wiebe contends that Berry manifests this moral imagination most acutely in his fiction.Berry's fiction, however, does not portray an average community or even an ideal one.

Instead, he depicts brokencommunitiesin brokenplacesasites and relations scarredby the routines of racial wounds and ecological harm.Yet, in the tracing of Berry's characterswith place-based identities, Wiebe demonstrates the way in which Berry's fiction comes to embody Berry'sownmoral imagination.

By joining these ambassadors of Berry's moral imagination in their fictive journeys, readers, too, can allow imagination to transform their affection, thereby restoring place as a facilitator of identity as well ashope for healed and whole communities.

Loving place translates into loving people, which in turn transforms broken human narratives into restored lives rooted and ordered by their places.