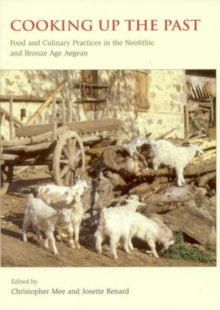 Cooking up the Past Paperback / softback

This volume focuses on the ways in which the production and consumption of food developed in the Aegean region in the Neolithic and Early Bronze Age, to see how this was linked to the appearance of more complex forms of social organisation.

Sites from Macedonia in the north of Greece down to Crete are discussed and chronologically the papers cover not only the Neolithic and Early Bronze Age but extend into the Middle and Late Bronze Age and Classical period as well.

The evidence from human remains, animal and fish bones, cultivated and wild plants, hearths and ovens, ceramics and literary texts is interpreted through a range of techniques, such as residue and stable isotope analysis.

A number of key themes emerge, for example the changes in the types of food that were produced around the time of the Final Neolithic-Early Bronze Age transition, which is seen as a particularly critical period, the ways in which foodstuffs were stored and cooked, the significance of culinary innovations and the social role of consumption.