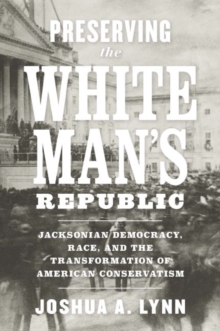 by Joshua A. Lynn

In Preserving the White Man's Republic, Joshua Lynn reveals how the national Democratic Party rebranded majoritarian democracy and liberal individualism as conservative means for white men in the South and North to preserve their mastery on the eve of the Civil War. Responding to fears of African American and female political agency, Democrats in the late 1840s and 1850s reinvented themselves as ""conservatives"" and repurposed Jacksonian Democracy as a tool for local majorities of white men to police racial and gender boundaries by democratically withholding rights.

As Lynn's book shows, this movement sent conservatism on a new, populist trajectory, one in which democracy can be called upon to legitimize inequality and hierarchy, a uniquely American conservatism that endures in our republic today.