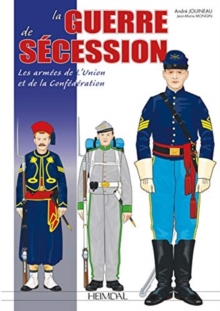 If there's one conflict that was remarkable from a lot of points of view, it was the American Civil War, better known in France as the War of Secession.

In this war the armies of the South opposed those of the North - the Union - of the almost hundred-years old republic of the United States of (North) America; it remains in the annals as the last classic war - in certain aspects the heir to the Napoleonic wars - and the first real modern war of the 20th Century in which "state of the art" technologies were used for the first time on a massive and intensive scale.

This bloody conflict was the result of a long chain of political, economic and ideological compromises between two civilisations which barely concealed the differences opposing them.

The ferocious appetites of the North against the principles of independence of the Southern States could only lead to an explosion.

Four years of relentless, bloody and total war during which Johnny Reb gave no quarter to his brother Billy Yank.

Everything has been said and written about this war: the joie de vivre of the South, its elegance, its chivalrous spirit, its attachment to secular traditions including slavery, facing the North's industrial war machine, its humanist values, its small-minded courage, but also its avidity and its implacable spirit of organisation.

From Gone with the Wind to Birth of a Nation, all the cliches have been used.

This book gives you as large a panorama as possible of the uniforms worn by the belligerents during this conflict.

The most characteristic silhouettes and the principles of basic organisation, as circumstances dictated, are shown in the now celebrated form of Heimdal's books.