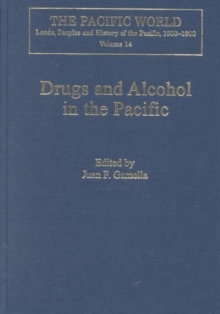 Drugs and Alcohol in the Pacific : New Consumption Trends and their Consequences Hardback

From the arrival of Europeans in the Pacific in the 16th century, introduced psychoactive drugs have played a crucial role in the history of societies from China to Peru, and from Alaska to Australia.

These substances joined a local base of indigenous drugs and fermented beverages to create new traditions of consumption that characterized entire peoples and cultures.

They were also tools of European domination, so crucial elements of cultural and economic change: opium in China, coca in the Andes, and tobacco and spirits in Oceania.

New consumption and production patterns revealed important differences among cultures and polities of the region, and spawned social problems that, in turn, transformed collective representations of these substances.

Some became powerful moral symbols that shaped influential social and political movements, such as the Temperance League in the U.S., and the anti-opium movement in China.