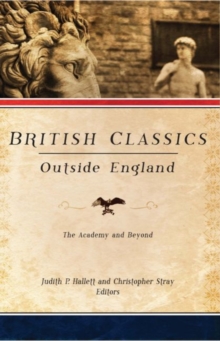 British Classics Outside England : The Academy and Beyond Paperback / softback

The essays in this informative book explore the impact of British classics--the study of Greco-Roman antiquity, with an emphasis on the classical Latin and Greek languages--beyond the borders of England itself, during the nineteenth and twentieth centuries: inside the academy as specialized scholarship and teaching, outside the academy as a mode of social and cultural formation.

Not only did British classics permeate England; they brought English values to Scotland, Wales, and America as well.

Far into the twentieth century, to learn classics "the Oxbridge way" was to cloak oneself in the mantle of a gentleman--even when the "gentleman" was a woman.