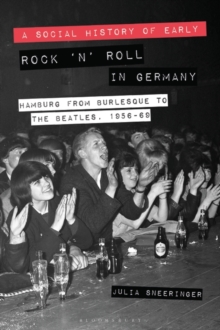 A Social History of Early Rock 'n' Roll in Germany : Hamburg from Burlesque to The Beatles, 1956-69 Hardback

A Social History of Early Rock 'n' Roll in Germany explores the people and spaces of St.

Pauli's rock'n'roll scene in the 1960s. Starting in 1960, young British rockers were hired to entertain tourists in Hamburg's red-light district around the Reeperbahn in the area of St.

Pauli. German youths quickly joined in to experience the forbidden thrill of rock'n'roll, and used African American sounds to distance themselves from the old Nazi generation.

In 1962 the Star Club opened and drew international attention for hosting some of the Beatles' most influential performances.

In this book, Julia Sneeringer weaves together this story of youth culture with histories of sex and gender, popular culture, media, and subculture. By exploring the history of one locale in depth, Sneeringer offers a welcome contribution to the scholarly literature on space, place, sound and the city, and pays overdue attention to the impact that Hamburg had upon music and style.

She is also careful to place performers such as The Beatles back into the social, spatial, and musical contexts that shaped them and their generation. This book reveals that transnational encounters between musicians, fans, entrepreneurs and businessmen in St.

Pauli produced a musical style that provided emotional and physical liberation and challenged powerful forces of conservatism and conformity with effects that transformed the world for decades to come.