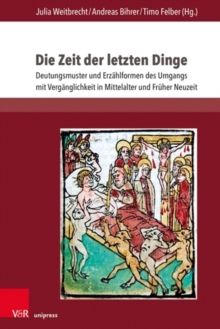 The finiteness of human existence is anthropologically constant, but the forms of their perception are historically and culturally highly variable.

This volume examines different ways of dealing with death in the Middle Ages and early modern times.

In confronting one's own mortality, diverse coping strategies such as narratives, images, symbols and rituals for medieval thinking reflect fundamental aspects of temporality that can be described as phenomena of heterochrony.

The spectrum of the contributions thus opens up a differentiated historical understanding of the diverse exchange phenomena between this world and the beyond as well as the integration of divergent time horizons into medieval life practice.