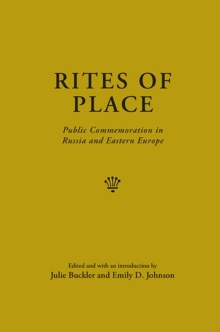 Ranging widely across time and geography, Rites of Place is to date the most comprehensive and diverse example of memory studies in the field of Russian and East European studies.

Leading scholars consider how public rituals and the commemoration of historically significant sites facilitate a sense of community, shape cultural identity, and promote political ideologies. The aims of this volume take on unique importance in the context of the tumultuous events that have marked Eastern European history-especially the revolutions of 1905 and 1917, World War II, and the collapse of the Soviet Union.

With essays on topics such as the founding of St. Petersburg, the battle of Borodino, the Katyn massacre, and the Lenin cult, this volume offers a rich discussion of the uses and abuses of memory in cultures where national identity has repeatedly undergone dramatic shifts and remains riven by internal contradictions.