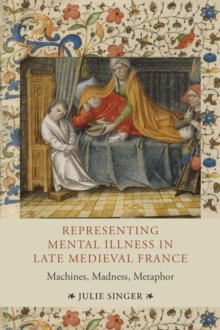 At the turn of the fifteenth century it must have seemed to many French people that the world was going mad.

King Charles VI suffered his first bout of mental illness in 1392, and he underwent intermittent bouts of frenzy, melancholy and ever-scarcer lucidity until his death in 1422.

The king's scarcely mentionable malady was mirrored at every level of social experience, from the irrational civil war through which the body politic tore itself apart, to reports of elevated suicide rates among the common people.

In this political environment, where affairs of state were closely linked to the ruler's mental state, French writers sought new ways of representing the psychological dynamics of the body politic.

This book explores the innovative mix of organic and inorganic metaphors through which they explored the relationship between mind, body and government at this period; in particular, it considers texts by such authors as Alan Chartier and Charles d'Orleans which describe mental illness and intellectual impairments through the notion of "rust". JULIE SINGER is Associate Professor of French at Washington University, St.