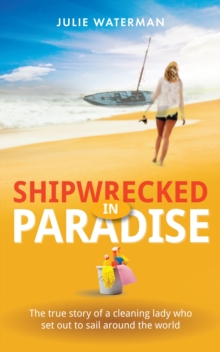 Shipwrecked in Paradise : The true story of a cleaning lady who set out to sail around the world Paperback / softback

Raised to a life of relentless hard work as one of seven children of a single mother, Julie Waterman was married and having her own first child by the time she was 17.

At 23 she was running her own cleaning company, making such a success of it that she was soon employing 400 people.

But at 35 she gave it all up to buy a second-hand yacht and embarked on the biggest adventure of all - an attempt to sail single-handed round the world.

There were parties in every port, along with a string of romances, some hilarious adventures and several narrow escapes from a watery grave.

But Julie stuck to her plan - until a tropical storm left her shipwrecked on an island in the South Pacific, where she lived for three glorious years, falling in love with a handsome young French diplomat.

Unfortunately her new paramour turned out not to be all he seemed - and Julie's round-the-world adventure was far from over.

Shipwrecked in Paradise is Julie Waterman's story of her colourful life, complete with the laughs, the loves, the maritime mishaps and the parties and pink gins.