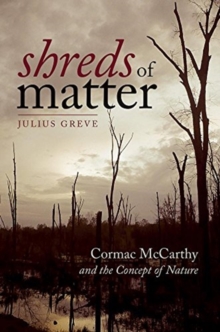 Shreds of Matter - Cormac McCarthy and the Concept of Nature Hardback

Shreds of Matter: Cormac McCarthy and the Concept of Nature offers a nuanced and innovative take on the writer's ostensible localism and, along with it, the ecocentric perspective on the world that is assumed by most critics.

In opposing the standard interpretations of McCarthy's novels as critical either of persisting American ideologies-such as Manifest Destiny and imperialism-or of the ways in which humanity has laid waste to Earth, Greve instead emphasizes the author's interest both in the history of science and in the mythographical developments of religious discourse.

Greve aims to counter traditional interpretations of McCarthy's work and at the same time to acknowledge their partial truth, taking into account the work of Friedrich W.