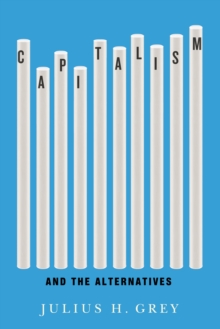 Capitalism and the Alternatives Hardback

Thirty years after its global triumph, neo-liberalism is an abject failure.

While its advocates have succeeded in convincing citizens that no other way is possible, that no left turn can be made without an economic collapse, they have not fulfilled their promises of a better world and the result has been more inequality, insecurity, and speculation.

Many have sought solace in collective goals - nationalism, narrow religion, and gender politics - while notions of universal solidarity, idealism, and humanism have all but disappeared. In Capitalism and the Alternatives Julius H. Grey seeks to rehabilitate economic equality as a fundamental social goal built on universal values such as individualism, liberty, and even romanticism.

To achieve this, he argues, it is necessary to move away from national, ethnic, religious, and even gender loyalties.

The importance in each society of common culture and widely accepted moral values, Grey suggests, cannot be overstated.

With its rampant political correctness, the modern left seems to have lost sight of morality and individual freedom.

While most commentators stake out a partisan position in their criticism, Grey's notion of individual romanticism as the basis of a socially progressive society and his stress on free will, culture, classical education, and the right to dissent demand an overhaul of both the right and the left. A fundamental rethinking of the social, political, and economic foundations of modern industrial society, Capitalism and the Alternatives proposes freedom from identity, instead of communitarianism and tradition, as a condition for liberty and justice.