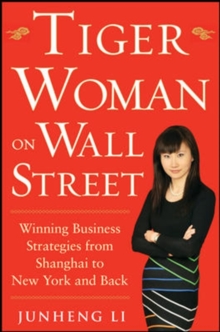 Tiger Woman on Wall Street: Winning Business Strategies from Shanghai to New York and Back Hardback

"For investors who are feeling tipsy at 'The Red Party,' Tiger Woman on Wall Street is a much-needed sobering up."--Forbes.comJunheng Li was the perfect Chinese tiger daughter, but from childhood on, she dreamed about America and working on Wall Street.

Born in Shanghai, the commercial and financial center of mainland China, Li was brought up in an environment that would raise most Westerners' eyebrows.

Her demanding father drilled her on her multiplication tables when she was three, and in school she was forced tomemorize facts and regurgitate them perfectly on tests.

Success at all costs was the mantra. When she arrived at Middlebury College in Vermont after studying round the clock for months to learn the English language, sheentered a completely different world, where values and morality were taught, individualism reigned, and analytical thinking was encouraged. Tiger Woman on Wall Street is both the remarkable, dramatic story of one woman's rise in the global business world and a savvy guide to finance and investing.

With unflinching candor, Junheng Li tells how a brainy, focused, highly driven Chinese girl who admiredScarlett O'Hara's indomitable spirit drew on the best of both worlds to go where few women have gone before: straight to the top of the financial industry. Tiger Woman on Wall Street takes you behind the scenes of the world's most important financial markets, from the daily routine of trading to high-level meetings with executives, policy makers, and analysts.

Li conveysin fascinating and revealing detail how she arrives at her investing decisions--a powerful combination of keen intuition, meticulous due diligence, and razor-sharp analysis.

Li argues that the current Chinese business growth model has hit a wall and shows why investors need to keep both eyes firmly open when investing--especially in China. By reading this book, you will learn how one of today's most successful China analysts smells a questionable investment a mile away, predicts industry trends, forecasts stock price movements, and develops investmentideas--both long and short--using techniques ranging from scrutinizing data to posing as an average customer in order to examine firsthand a company's latest product.

You will also meet colorful characters such as Knucklehedgie,an American hedge fund manager who invests in Chinese companies based on brokers' bragging, and a Chinese executive who takes conference calls with investors while at nightclubs and who made his fortune by selling fraudulent Chinese companies to global investors. Striking a rare balance between page-turning storytelling and practical investing guide, Tiger Woman on Wall Street shows how one woman has navigated her way through and thrived in this increasingly complicated and exciting period in modern financial history. Praise for Tiger Woman on Wall Street"Junheng Li is one of the most astute market analysts I have met in my long career.

Her healthy skepticism of China's inevitable rise to economic and market supremacy is refreshing, and her razor-sharp analysis of Chineseequities is as compelling as the story of her own journey from the streets of Shanghai to Wall Street." -- Ron Insana, CNBC contributor"For investors who are feeling tipsy at 'The Red Party,' Tiger Woman on Wall Street is a much-needed sobering up.

For those new to the country, this book is China 101, covering not only the business but also the social and political landscape.

Li's simple, explanatory language makes the book an easy read even for those without an investing background." -- Forbes.com"Tiger Woman on Wall Street is a fascinating read on a subject that couldn't be more timely.

A must-read for Western (and Chinese) investors and businesspeopleinterested in China." -- Jim Chanos, President/Founder, Kynikos Associates"We can all learn a lot about finance and investing from Tiger Woman on Wall Street.

Through brains, honesty, and grit, Li has thrived on Wall Street by applying the investigative and analytical skills she learned in China, and this terrific book shows how she did it." -- Karen Finerman, Cofounder and President of Metropolitan Capital Advisers and author of Finerman's Rules"While alpha males have long dominated Wall Street, now comes a Tiger Woman who may very well eat their lunch in the ultracompetitive world of stock market research.

This book tells her extraordinary story and many ofher investing secrets." -- Minggao Shen, Chief Economist for Greater China, Citigroup"A profound exploration of the heart and mind of modern-day China.

With passionate and penetrating prose, Junheng Li expertly uses her remarkable personal story to illuminate the complexities of China's great economic opportunities--and even greater risks." -- Deborah Davis, bestselling author of Strapless, Gilded, and Party of the Century"There is no question that Junheng Li is an incisive analyst with a unique perspective on some of the defining international and market issues of our times. Tiger Woman on Wall Street demonstrates this in every chapter. But what is especially remarkable is how she uses her own compelling personal story to both add a human dimension to those issues that brings them to life and adds credence to her reliably sound market insights. She is allergic to hype and superficiality. Her own experiences explain why, and serve to offer refreshingly fact-based and granular perspectives on the sweeping, inspiring, and often misleading stories and myths surrounding China's rapid ascent." -- David Rothkopf, CEO and editor-at-large, Foreign Policy magazine; author of Superclass and Power, Inc. "This very readable book adds a lot of color to what has been a widely misunderstood process in China.

By telling her story as an investor, Junheng Li shows in concrete detail how the financial system in China is currently structured in such a way that capital misallocation is not only possible, but indeed is highly likely.

Through her own story, Li also shows that under the right conditions, the Chinese people have the courage and determination to take their country to great heights."" -- Michael Pettis, Professor of Finance, Guanghua School of Management, Peking University, Beijing""Anyone considering doing business with China or investing with Chinese companies may find Li's book to have relevant insight into the business culture of China." -- Booklist 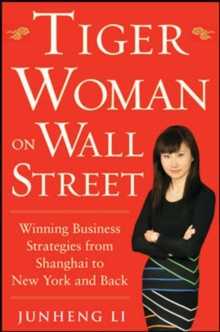