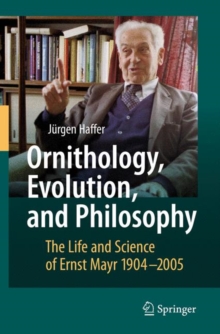 Ornithology, Evolution, and Philosophy : The Life and Science of Ernst Mayr 1904-2005 Paperback / softback

This book is the first detailed biography of Ernst Mayr.

He was an 'architect' of the Synthetic Theory of Evolution, and the greatest evolutionary biologist since Charles Darwin, influential historian and philosopher of biology, outstanding taxonomist and ornithologist, and naturalist.

He is one of the most widely known biologists of the 20th century.

Mayr used the theories of natural selection and population thinking as theoretical models within the framework of historical biological studies.

He was the first to emphasize the role of biopopulations, thereby pointing out the basic difference between 'population thinking' and typological essentialism.