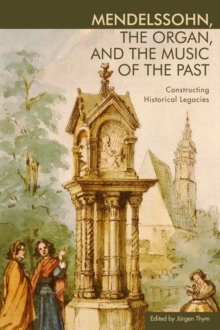 Mendelssohn, the Organ, and the Music of the Pas - Constructing Historical Legacies Hardback

By upbringing, family connections, and education, Felix Mendelssohn was ideally positioned to contribute to the historical legacies of the German people, who in the aftermath of the Napoleonic Wars discovered that they were a nation with a distinct culture.

The number of cultural icons of German nationalism that Mendelssohn "discovered," promoted, or was asked to promote (by way of commissions) in his compositions is striking: Gutenberg and the invention of the printing press, Durer and Nuremberg, Luther and the Augsburg Confession as the manifesto of Protestantism, Bach and the St.

Matthew Passion, Beethoven and his claims to universal brotherhood. The essays in this volume investigate from a variety of perspectives Mendelssohn's relationship to the music of the past, including the significance of Bach's music for the Mendelssohn family, the homages to Bach in Mendelssohn's organ compositions, the influence of Beethoven in the Reformation Symphony, and Mendelssohn's reception and use of Handel's oratorios.

Together, the essays shed light on the construction of legacies that, in some cases, served to assert German cultural supremacy only two decades after the composer's death in 1847. Contributors: Celia Applegate, John Michael Cooper, Hans Davidsson, Wm.

Larry Todd, Christoph Wolff Jurgen Thym is professor emeritus of musicology at the Eastman School of Music and editor of Of Poetry and Song: Approaches to the Nineteenth-Century Lied (University of Rochester Press, 2010).