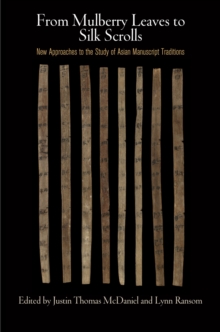 From Mulberry Leaves to Silk Scrolls : New Approaches to the Study of Asian Manuscript Traditions Hardback

While European manuscripts have been the subject of numerous historical, philological, and art historical studies over the past three decades, the study of the material culture of Asian (Buddhist, Hindu, Islamic, Taoist, and the like) manuscript traditions remains a relatively unexplored field.

But Asian manuscripts, as the contributors to From Mulberry Leaves to Silk Scrolls demonstrate, contain much more than the semantic meaning of the words they reproduce.

The ten essays collected here look closely at a wide variety of manuscript traditions with a special focus on both their history and the ways in they can be studied through digital technology to make the cataloguing, comparative analysis, and aesthetic appreciation of them more accessible to scholars and students. Each essay examines ways in which hand-produced texts-from ancient to early modern Thai, Pali, Chinese, Central Asian, Sanskrit, and Arabic manuscript traditions-shape both meaning and interpretation, and to a larger extent, the cultural norms that define their use.

Together, the essays explore topics such as the best current practices for preservation and cataloging, the value of collaboration among scholars who work on different aspects of codicological, paleographic, orthographic, and material culture studies, and the use of these material objects for religious, political, cultural and pedagogical purposes.