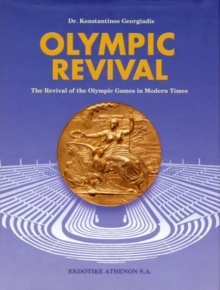 This book is the result of intensive research and study.

It will give the reader the opportunity to look more deeply at the movement for the revival of the Olympic Games, and especially at the part that modern Greece has played in the re-establishment of this great institution.

Historically, the revival of the Olympic Games was founded on the will and efforts of many individuals.

It was achieved by cumulatively making good use of various different endeavours, reinforced as they were by the cultural current of the time.

The book includes many hitherto unpublished texts, principally of letters exchanged between leading figures with their common goal.

This makes the book a rich source of knowledge from which to draw potentially invaluable data for today's and tomorrows Olympic historians.