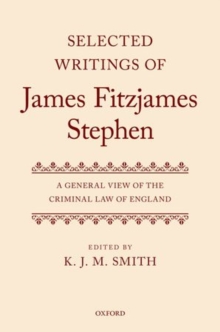 Selected Writings of James Fitzjames Stephen : A General View of the Criminal Law of England Hardback

Published in the summer of 1863, A General View of the Criminal Law is a highly original account of the fundamental nature, substance and functioning of the criminal law in mid-Victorian England.

Written with the assurance and facility of one whose active interests extended well beyond the law into politics, literature, philosophy, and religion, Fitzjames Stephen's General View has three broad objectives: to expose the workings of the institution ofcriminal law to the scrutiny of both lawyers and non-lawyers; to locate the criminal law in its appropriate political and social context; and to elevate the study of criminal law to a level which would qualify it to be 'an interesting part of a liberal education' - in effect, for it to be recognised as one of theemerging social sciences.

While in general holding to the book's expressed aims and seeking to offer a balanced analysis, in the many contentious areas of the criminal law examined there is rarely much doubt about Stephen's own position.

Characteristically, as in his earlier and later works, in the General View analytical acuity operates in combination with an emphatic - frequently no holds barred - polemical style of argument.