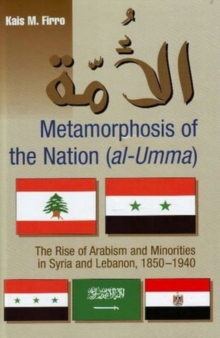 Metamorphosis of the Nation (al-Umma) : The Rise of Arabism and Minorities in Syria and Lebanon, 1850-1940 Hardback

Studies on nationalism in the "Arab World" have dealt with the socio-economic conditions through which the nationalist phenomena emerged.

Notwithstanding the importance of these conditions, the focus here is on the cultural aspects as manifested in the language of the discourse and ideology.

Proto-nationalist and nationalist phenomena could not exist outside their discourse and ideology through which they were modelled, shaped and identified as a conceptual framework through association, behavioural patterns, and loyalty to collective identities.

Theorists of nationalism tend to deal with the terms nation, nationalism as givens without specifying the exact time and place in which the terms had been coined to signify their concepts. This book focuses on nationalist and ethnic discourse through textual analysis from classical and modern Arabic.

Tracing the development in the usage of terms related to collective identities, the present study shows that Arabic print language, education and press rooted the usage of al-umma to signify several connotations in accordance to its user, creating perplexity for defining al-umma. Chapters trace the usage of umma, qawm, sha'b and 'arab in the classical texts; investigate the development of the nationalist discourse since the end of the 19the century until 1940; and deal with four religious communities in Syria and Lebanon, and the role of their intellectuals in formulating ideas concerning their self-image in nationalist terms.

Throughout, the study keeps track of the changes in Arabist discourse of the term "umma".

A Conclusion reevaluates the ethnic and nationalist discourse at the present time, showing that the elitist characteristics of al-umma, "the nation", has had a limited influence on subduing parochial identities such as tribes and religious communities, as well as the Islamic cosmopolitan identity. This book is essential reading for all those engaged in the study and research of collective identity, Islam, nationalism and ethnicity. 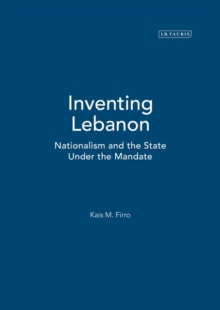