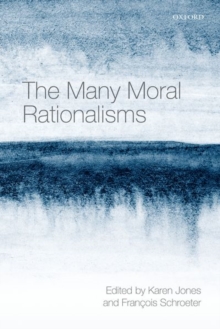 The Many Moral Rationalisms Hardback

Moral rationalism takes human reason and human rationality to be the key elements in an explanation of the nature of morality, moral judgment, and moral knowledge.

This volume explores the resources of this rich philosophical tradition.

The five essays in Part I ('Normativity') offercontemporary defences or reconstructions of Kant's attempt to ground the normative thesis, that moral requirements entail valid reasons for action, in the nature of practical reason and practical rationality.

The four essays in Part II ('Epistemology & Meaning') consider the viability of claims to a priori moral knowledge.

The authors of all four essays are sympathetic to a realist moral metaphysics, and thus forgo the straightforward constructivist road to apriority. The four essays inPart III ('Psychology') each grapple with the implications for rationalism of the role of emotions and unconscious processes in moral judgement and action.