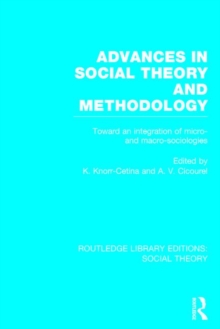 Advances in Social Theory and Methodology : Toward an Integration of Micro- and Macro-Sociologies Hardback

After a period in which sociology was torn apart by the polarized claims of micro- and macro-methodology, an increasing number of sociologists are now attempting a fusion of the two approaches.

In this volume, some of the most distinguished sociologists set out possible resolutions of the debate.

Each of the chapters, placed in perspective by the editors' prologue, approaches the problem from a unique angle.

Aaron Cicourel argues for a macro-basis of social interaction; Randall Collins shows how the macro consists of an aggregate of micro-episodes; Troy Duster presents a methodological model for generating a systematic data base across different contexts of social action through his examination of the procedures governing screening for inherited disorders.

Rom Harre launches a philosophical attack on what he sees as a spurious bifurcation of micro- and macro-levels.

Anthony Giddens explores the problem of unintended consequences, and Gilles Fauconnier, through a depiction of Jesuitical casuistry, shows how vital clues to macro-structure can be elicited from the micro-phenomenon of language.

Victor Lidz continues the language theme in his chapter on the implications of advances in linguistic theory for macro-systems theory.

Niklas Luhmann illustrates the micro-macro problem by the communication about law in interaction systems.

The theory of historical materialism is reassessed by Jurgen Habermas.

Taking the example of Renault and electric vehicles, Michel Callon and Bruno Latour investigate how micro-actor status is attained and the sociologist's involvement in this transformation.

Finally, Pierre Bourdieu, writing on men and machines, analyses the historical imperatives that create the complex relation between man and his environment.