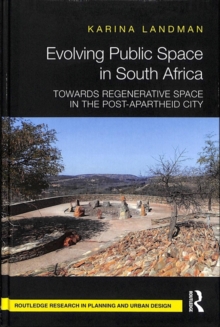 Evolving Public Space in South Africa discusses the transformation of public space highlighted in the country.

Drawing on examples from major cities, the author demonstrates that these spaces are not only becoming wasted space, but are also adapting and evolving to accommodate new users and uses in various parts of the city.

This process of evolution tends to challenge the more traditional visions and general global views of declining public space in cities and argues that it rather resembles the resilience of these spaces and the potential for regeneration through continuously emerging and mutating forms, functions and meanings.

Including over 20 black-and-white images, this book would be beneficial to academics and students of urban planning and design and those interested in the regeneration of cities.