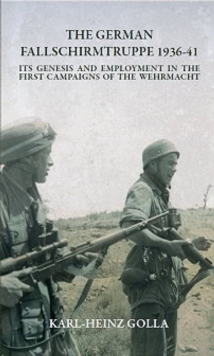 The German Fallschirmtruppe 1936-41 (Revised Edition) : its Genesis and Employment in the First Campaigns of the Wehrmacht Hardback

The Fallschirmtruppe of the Wehrmacht won recognition for their valor and endurance not only from their fellow German soldiers, but from their former enemies as well.

On the basis of careful and comprehensive research, including utilizing extensive unpublished documentary and personal materials, the author covers the history of the Fallschirmtruppe from its genesis and early training to its employment in combat in Scandinavia, the Albert Canal in Belgium, Holland, the Greek mainland and, of course, at Crete.

The reasons for the remarkable successes of the German Fallschirmtruppe during this period are analyzed, as are also the conceptual weaknesses inherent in its formation, and the faults in the command and control during its combat employment. The author, himself a former Bundeswehr Fallschirmjager and General Staff officer, has also utilized accounts from those who fought the Fallschirmtruppe, and has thus been able to correct many errors perpetuated in previous books on this subject, besides providing more complete coverage. The text is supplemented by approximately 100 b/w photos and more than 25 detailed color maps. This is a remarkably detailed study, firmly based on documentary sources, and is destined to become one of the definitive works on its subject in the English language.

This revised edition has been prepared exactly according to the author's instructions.