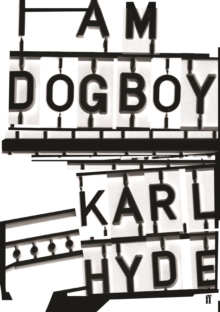 I am Dogboy : The Underworld Diaries Hardback

Every day since then, Hyde has documented his thoughts, lyrical works-in-progress, poetry and biographical essays alongside 'found' visuals.

For the last sixteen years, these entries have collectively created an on-going, utterly unique monologue on Underworld's website. I Am Dogboy handpicks a selection of diary entries and rearranges them to create an autobiographical narrative that takes Hyde from childhood through to the exploratory early years of Underworld, an electronic act who have been peerless for the last twenty five years.

Spliced throughout the narrative are standalone/abstract poetic pieces that offer occasional snapshots of life on the road and in the studio and give an insight into Hyde's singular style of lyric writing. The book is beautifully designed by John Warwicker - Hyde's long time collaborator and co-founder of the Tomato collective.

Skyscraper I Love You and In The Belly of St Paul.