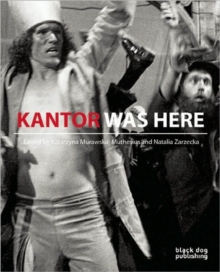 He is renowned for his revolutionary theatrical performances in Poland and abroad, and it has been said that Kantor was to Polish art what Joseph Beuys was to German art, and Andy Warhol to American art. Recently there has been a rise in interest in Kantor's work.

Focusing on his comprehensive artistic oeuvre, from his visual artwork, to installation pieces and graphic works, to his celebrated innovations in theatre practice.

This major study is the most ambitious book on Tadeusz Kantor to be published in the English language to date. Co-edited by Katarzyna Murawska-Muthesius and Natalia Zarzecka, this volume exposes substantial critical debate surrounding Kantor's works through a collection of essays by exponents of the British art scene who personally co-operated with Kantor during his stay in the UK, including Richard Demarco, Sir Nicholas Serota and Sandy Nairne. Reviews by eminent British curators and critics, including Sarah Wilson, George Hyde and Noel Witts, will address the wider perspective on Kantor's artistic career, published here for the first time. The book is lavishly illustrated and includes previously unpublished photographs documenting Kantor's performances at the Edinburgh Festival and the Riverside Studios, and his exhibition at the Whitechapel Gallery in 1976, as well as the artist's drawings, from British private collections.