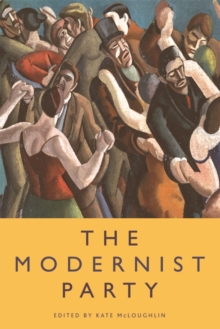 Have you ever been struck by the number of parties in Modernist literature?

Mrs. Ramsay drowns in anguish at the dinner-party she gives in Woolf's To The Lighthouse.

Death is a guest in Katherine Mansfield's The Garden Party.

Politics sour the evening party in Joyce's The Dead.

Have you also noticed the role played by parties in the public intellectual culture of Modernism?

A party held in London by Amy Lowell on 17 July 1914, attended by Ezra Pound, Ford Madox Ford, H.D. and Richard Aldington, degenerated into an argument over the nature of Imagism.

On 18 May 1922, Proust, Joyce, Picasso, Stravinsky and Diaghilev met at a post-ballet party at Paris' Hotel Majestic: an unrepeatable encounter between Modernism's leading figures.

In The Modernist Party, internationally distinguished scholars explore the party both as a literary device and as a social setting in which the movement's creative values were developed.

It develops the concept of space, currently of central concern to Modernist scholars. It explores the tensions between Modernism as an aesthetics of intensity and Modernism as a movement of the everyday.

It adds a new and vital area of research to investigations of Modernism as the product of intellectual and social networks.