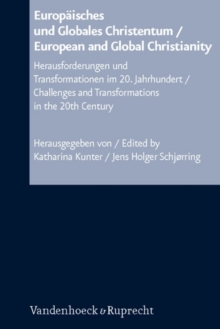 European and Global Christianity : Challenges and Transformations in the 20th Century Hardback

The historical study of Protestantism is often limited to internal or national discussions.

Yet a broader, international look means also studying the major upheavals that occurred throughout the world, such as wars and globalisation.This volume first reviews the history of the church in the 20th century from an international and interdisciplinary vantage point and takes a look at the most important themes and conflicts that marked that often tension-filled time, among others the two world wars, globalisation, the broad number of continuities and discontinuities, the influence of the 1960s on social life, and the debate on the role of gender in the history of Christianity.